Aly Monroe was born and educated in England. She has spent a large part of her life abroad – mostly in Spain, where she worked as a teacher, translator and voice-over, and ran Shakespeare workshops for teachers and actors. Aly is married and has three children and three grandchildren.

When and how did you start writing? 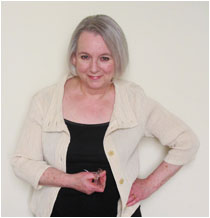 It’s something that has evolved naturally as I’ve got older. I’ve always been a collector of voices: a phrase, a particular tone, sometimes complete with a facial expression – little snippets of memory that have stayed with me.

Some years ago, we began taking increasingly frequent trips from Spain, where we lived for a long time, to Edinburgh. I think the change of viewpoint stimulated my mind. Things seemed to move over and leave space, and I found these voices beginning to evolve – particularly just before I went to sleep at night.
At that point I wasn’t sure what I was going to do with them. What I did know was that I was at a different stage in my life and wanted a new challenge. I’ve never been a great believer in gender and genre so I thought it would be interesting to write about a subject traditionally associated with male fiction, and to bring to it my viewpoint as a woman.

How did the idea for Peter Cotton come to you?

I’d been mulling over the Cotton series for so long that it’s difficult for me now to pick out exactly when he started.  Living abroad for so many years, gives you have a familiarity with both the place you live in and the place you come from, but also a detachment from both. I’ve always found this dual perspective interesting, and have given it to Peter Cotton. I knew from the beginning that he was born and partly brought up abroad - a kind of half-son of Empire, something of an outsider in the UK, or at least, someone who had seen other viewpoints.

I think the initial seeds for stories are often sown very early on.  When I was about twelve, I used to travel one stop to school on a commuter train. I remember one morning sitting opposite a row of bowler hats with newspapers  – everybody silent and still, like something out of a Magritte painting. I noticed that one of the hands holding the pages of the newspaper had two fingers missing.  “Yes,” said my father when I told him later. “That happened to a lot of people in the war. He was lucky.” That image, and something in the tone of my father’s voice as he said those words, stayed with me.

But I think watching my parents’ generation grow old as my children grew up had a lot to do with the initial impulse for the series. I remember, years ago, first after my father died and then after my mother-in-law died, looking at family photos from the nineteen forties, and realising that the faces staring back at me were younger than my children. It made me ask myself more seriously what life had really been like for them.  I’ve always been struck that people can end up doing extraordinary things because of happenstance. For the young men of Cotton’s generation, World War II was a huge, prolonged happenstance that had a profound effect on the way their lives were played out. Young men – by today’s standards incredibly young - found themselves in extreme circumstances having to take responsibility in unexpected situations - often with little in the way of equipment, information or instructions. For those that survived, this made them something they would never have been.

I think these were the starting points for the Peter Cotton series. I thought it would be interesting to show the path of one of these young men over a number of books, in the aftermath of the Second World War and during the decline of Britain as a  colonial power. I didn’t want a traditional, ready-made, derring-do hero. I was much more interested in the ‘real’, experience, sometimes the grubby realities, and showing how he becomes what he will be.

I hope Peter Cotton’s voice is real in the sense that it represents a humble reality rather than an artificially imposed heroism, and also shows him as a creature of his time. There are very few people left who lived through this period – it is just within living memory – but I have noticed that those who are still alive, and can still express themselves, have become more and more honest about the messy, incompetent and often casually cruel way in which things happened.

You can read more about Peter Cotton on the Beyond the Books page of this website.